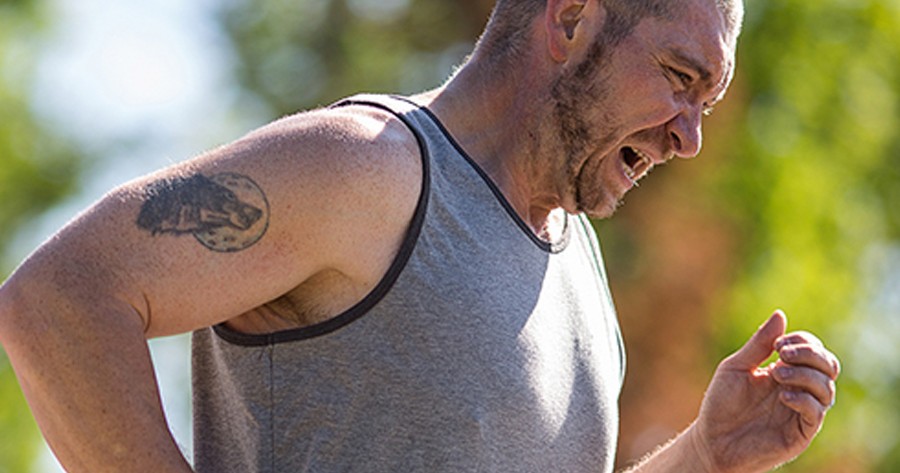 Dan Rivord (above) won his race even before he approached the starting line at the recent Hope Starts Here Challenge 13-mile run. That’s because he knew that no matter where on the competition list he finished, he would finish.

Prior to bariatric surgery at UP Health System – Marquette, Dan wouldn’t have even dreamed of starting such a race.

At age 40, today the 185-pound Ishpeming resident has an athletic build that could easily be the envy of men decades younger.  But at the time of his surgery in May of 2014, Dan’s health was failing fast – primarily due to his weighing 360 pounds.

Studying a photo taken shortly prior to his bariatric procedure, Dan says, “I was always a little bit bigger guys, but not like this. I don’t know how, but my weight just got away from me.  The next thing you know, I’m at work and one night I could feel my blood pressure in my eyes.  My blood pressure was 210 over 110 and the doctor said, ‘You’re going to have a stroke.’”

A US Army veteran, Dan has worked the past 17 years for Cliffs Natural Resources. Weight gain for Dan was “like a yo-yo” over several years. He recalls, “I could lose 60 pounds, then gain 80 or 90. After a while you just get frustrated and you just give up.”

Dan made a decision to attend a bariatric surgery education/screening at UPHS – Marquette, learning that the surgery could – combined with serious lifestyle changes – help him get his weight under control and start restoring his health.

“I learned that you have to change or you will go back to the way you were,” says Dan. “Not everyone is a candidate for bariatric because it can’t be used just as a shortcut to jumpstart a diet.”

At UPHS – Marquette, Dan underwent the “Roux-en-Y Gastric Bypass” procedure.  This procedure involves surgery in which the stomach is made smaller by creating a pouch from the top of the stomach.  The remainder of the stomach is divided from the top and sealed shut. According to the American Society for Bariatric Surgery and the National Institutes of Health, the Roux-en-Y gastric procedure is the most common of several bariatric surgery options in the U.S.

Dan explains that in addition to skyrocketing blood pressure, high cholesterol, sleep apnea and history of skin cancer, prior to bariatric surgery his obesity was a self-perpetuating downward spiral in other ways:

“My ankles, my knees, my hips, my back – they all hurt when I was so heavy. So I’d come home from work and sit on the coach and watch TV because everything hurt.”

The successful bariatric surgery which Dan underwent was just the first step in taking control of his weight and his health.

“Within four or five days after surgery I was walking a mile and a half every day.  Pretty soon I was up to eight miles and then I started going to the gym, lifting weights and building muscle and endurance. I started running in December to burn more fuel. I bust my butt in the gym.”

“Fuel” is how Dan now describes the way he thinks of food.  He cut out his soda intake, drinks alcohol only occasionally and avoids fried food. He says, “I find myself reading a lot of ingredient labels on food packages.”  That means watching carbs, cutting back on bread and pasta.  “So I eat healthy choices all time. It’s helped everybody in my family eat better and my wife is shocked at how much energy I have.”

He concludes, “I don’t use food as a comfort thing now. I’m fueling the machine. Bariatric surgery is actually a tool to help you do your work.”

Dan had no complications from the bariatric surgery. He explains his early and ongoing success simply: “Because I did exactly what I was told by the doc before and after.”

His advice for others with a history of struggling with their weight and are now considering bariatric surgery, is to not view the option as some sort of shortcut or easy fix.  Dan says, “Some people think it’s a cure, but you have to do the work.  It has to be a whole life change.”

Yes, Dan did finish the Hope Starts Here 13-mile run, taking fourth place in his age category. But just wait until next year.